You Don’t Even Need To Try 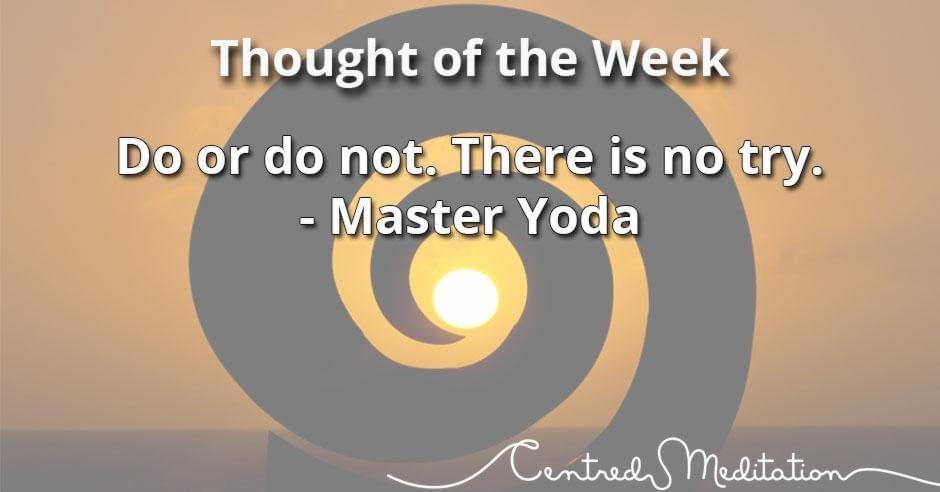 Kevin has been a die-hard Star Wars fan for as long as he can remember. So much so that he was absolutely appalled that I (Nikki) hadn’t seen a single episode when we first met. In fact, watching the entire series (and enjoying it) was an unspoken prerequisite for marrying him! Let the record show that I too am now a big fan 🙂 One of our mutually favourite lines of all time is by none other than Yoda himself, from The Empire Strikes Back:

“Do or do not. There is no try.” We love it because it is such a relevant principle that can have a pretty powerful impact on our day to day functioning. Think about it… when we are asked to do something, how often do we respond with ‘ok, I’ll try’. However, have you ever stopped to uncover why we respond this way? And whether it is even possible to ‘try’ to do something in the first place?

In fact, let’s do it now….Try to lift your phone up.

One of two things would have happened:

As you can see, a task will either be completed or not, there isn’t really a middle ground between the options. ‘Trying’ doesn’t tangibly exist.


What happens when we say “I’ll try”? Well, when we enter into the realm of ‘trying’, what comes with it is the possibility of failure. Since failure has such a bad rap (mostly because of what we make it mean about ourselves), this can have all sorts of subconscious detrimental effects on us. By succumbing to the fact that we might fail, on one level we are mentally preparing our ego in the case that we do fail, but on another level we are popping a seed of doubt into our minds which actually acts to hinder our ability to succeed from the outset.

Yoda’s advice to “do or do not” moves us beyond the grey and into the black and white, without all the drama. You see, the phone is either picked up or it’s not. And that’s the end of it. ‘Trying’ is neither here nor there and certainly is not an outcome in and of itself. Rather, it’s a good excuse. An excuse not to fully commit. A way of doing only some of the job (or none at all), but still feeling OK about it. You see, when we say we will do something, most of us would like to believe that we have the integrity to follow through with it. By only committing to ‘trying’, we have a great out if it all gets ‘too hard’ or we just become ‘too busy’ (which aren’t valid excuses anyway).


Our solution to getting beyond the constraints of ‘trying’ is to get rid of the word ‘try’ from your vocabulary altogether. This require you to:

Remember, this will take some time, so practice self-compassion in the process!