The Myth Of Multitasking 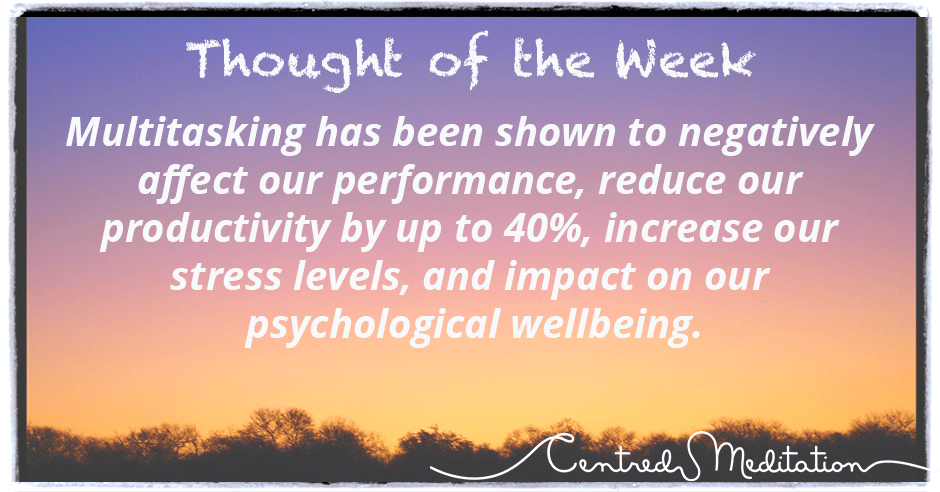 This may or may not come as a surprise to you, but research shows that multitasking can actually reduce our productivity by up to 40%! Let’s break it down…

What constitutes multitasking?
Multitasking takes place when we attempt to perform two tasks simultaneously (which by the way the brain can’t actually do), to switch from one task to another, or to perform two or more tasks in rapid succession.

What happens in the brain when we multitask?
When we switch tasks, our executive control processes automatically undergo two distinct, complementary stages. The first is called ‘goal shifting’ and involves making the decision to do something instead of what we are currently doing. The second is called ‘rule activation’ and involves turning off the rules for what I was doing, and turning on the rules for what I am now doing. Each time we switch tasks, glucose is burned. When our glucose levels are depleted, the stress hormone cortisol is released as a means of mobilising additional glucose.

How does it reduce productivity?
Both of the two stages involved in re-configuring the mental control settings for a new task cost us time. Although switch costs may be relatively small, sometimes just a few tenths of a second per switch, they can add up to large amounts when we switch repeatedly back and forth between tasks.

Multitasking also negatively affects performance. The increased cognitive load makes us less efficient, less effective, and more likely to make mistakes. When glucose is burned it makes us tired, and when our stress hormones are heightened, our creativity and memory are affected.

Finally, multitasking impacts our psychological wellbeing. It makes us feel distracted, overwhelmed, and frustrated when tasks are not being completed or done well.

Can we get better with practice?
Interestingly enough, people who multitask more often are actually worse at it. Their brains take longer to switch between tasks than the brains of people who tend to do one thing at a time. Heavy multitaskers have more trouble filtering out irrelevant information and are distracted by everything. So the more we multitask in general, the more difficult we then find it to sustain focused attention when necessary.

What’s the alternative?
Try implementing unifocus instead. This means completing one task, or a section of a task, before moving on to the next. It also means switching between tasks less frequently. When it is indeed time to switch tasks, take a brief moment to set an intention to bring your full attention to the new task. When you become distracted, simply return to the task at hand, without judgement or self-criticism, as this will only serve to further distract you. It might help to schedule a digital detox time where distractions (emails, mobiles etc) are turned off.

Another tactic is to up the ante on your meditation front. Research has shown that meditation strengthens the ‘awareness muscle’ in the brain. In scientific terms, MRI scanning and Rapid Visual Information Processing (RVIP) tests find that meditators have greater stability in their ventral posteromedial cortex (vPMC), the part of the brain associated with mind wandering and spontaneous thoughts.